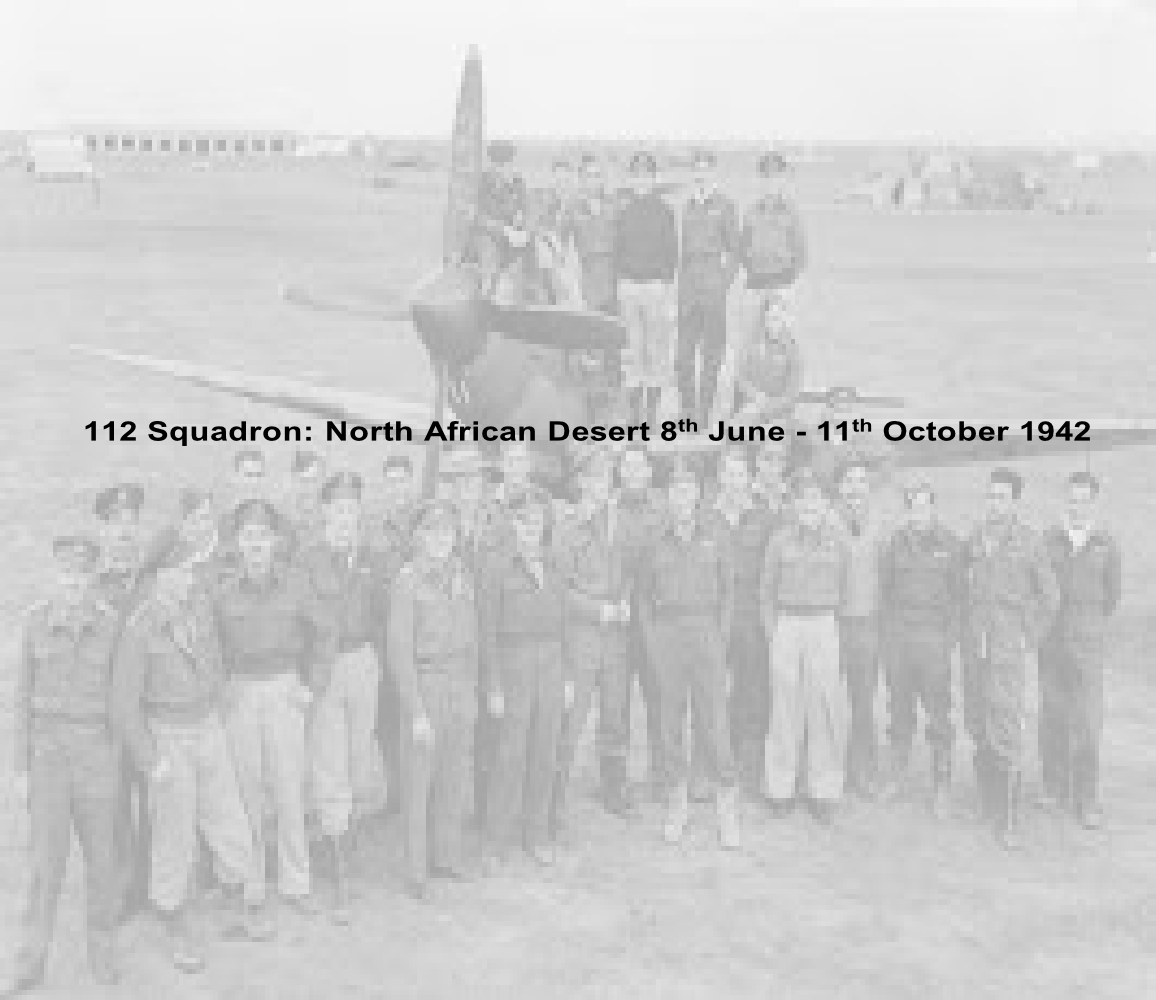 Sept 1942. Captioned by Desmond "Morrison with my kite", this is New Zealander Sergeant J. H. Morrison (service no. 41144) in front of Desmond's P-40 Kittyhawk.

Before joining his new squadron Desmond first attended the Desert Air Force Training Flight on the 8th June to learn to fly the Curtis P-  40 “Kittyhawk”. The base, a rough airstrip on the coast near Alexandria was close enough to Cairo to visit once training had finished for  the day. All the men endured a rough, exposed and dangerous life sharing tents and sparse rations such as one canteen of water per  day for drinking, washing and shaving, hard-tac biscuits and occasional eggs. Regular and uncomfortable sandstorms left dust  everywhere and in everything.

Desmond began o.p.s on the 20th of June and was quickly averaging 4 sorties a day on bomber escort and ground attack duties. On  the 4th of July, Desmond claimed his first enemy destroyed- a Stuka. Initially recorded as a ‘probable’, it changed when his victory was  confirmed by soldiers of the 7th Armoured Division.

During a raid  against LG21 on the morning of the 5th, Desmond dropped a bomb amongst aircraft parked in the dispersal area, turned  away and descended to very low level to strafe a line of trucks but the enemy gunners hit his Kittyhawk. He force-landed near British  tanks and although initially reported as missing, was picked up and returned to the squadron. On the 31st of July  during a raid on  Panzer Headquarters Desmond got in to another dogfight, damaged a 109F but was then attacked by several enemy 109s, whose  bullets struck his engine, cockpit and tail.

Desmond was promoted to Pilot Officer by Squadron Leader Billy Drake on the 1st of August who described him as “One of my best  pilots, a delightful man and sound as a rock. He could always be relied upon to do what he was told and do it well - he was completely  and utterly reliable”.

While leading a section on patrol on the 30th August. Desmond and his colleagues encountered 15x  ME109s and Italian MC202s  which, despite being outnumbered in the dogfight, he described as the best combat he had experienced.

On the 3rd of Sept. Desmond led one of two sections of 4 Kittyhawks. At 11.15am they saw  eleven 109s of II/27. Desmond again led  his section in to the attack and got a 109F but was hit and again lucky to emerge unscathed. He left  112 Squadron on the 12th of  October to join 601 Squadron and fly Spitfires again, a move that would  ultimately establish his reputation as a fighter ace and one of  the RAF’s best pilots.